It’s time to figure out which one is right for you. To help make that decision, let’s use the information we’ve learned so far to answer a couple of key questions you should ask yourself before buying a VR headset.

There is so much VR content currently available: games, videos, tours, live events, training tutorials, seminars, interactive narratives. The list goes on and on. Deciding on the type of content you’re most interested in and likely to explore will help you choose the right type of headset.

Are you primarily focused on doing some serious VR gaming? You’re probably going to want a tethered system. New to VR or just looking to stream the occasional 360° video? Try a smartphone headset before going all in on a more powerful system.

Which performance features are most important to you?

It’s easy to think of the different types of VR headsets as tiers of performance. Tethered headsets are more powerful than untethered headsets, so they must offer better performance. Unfortunately, while there is logic in that assumption, it doesn’t always hold true, especially when you start looking at individual performance metrics.

So how should we approach performance? The “more power equals better performance” approach is a good place to start. If you’re looking for a headset with high resolution and refresh rate, then beginning your search in the tethered systems section is a good bet.

However, when it comes to performance, there are exceptions, especially when you start looking at individual specs.

Consider the HP Reverb, for example. The Reverb is an untethered VR headset. From that description, we can assume it offers more freedom of movement than its tethered peers and, depending on the user, a more immersive experience.

We might also assume that, as an untethered headset, the Reverb is less powerful than those same tethered devices, and that its performance isn’t quite as impressive.

But there we would be wrong. Because, yes, while it’s true that most tethered systems are more powerful than the Reverb, few, if any, can match its refresh rate or resolution (which is 2160 x 2160 per eye, by the way).

However, most users are better off viewing performance as a whole. For those who do, the “more power equals better performance” rule is a good place to start. But for those who do prize one metric above the rest (resolution, for example), be sure to keep the Reverb in mind and explore the other tier types, as well.

How big is your play area?

One of the ironies about VR is although it is a gateway to a world of infinite possibilities and far-reaching horizons, reaching those worlds and horizons is largely dependent on the size of your cramped studio apartment. In other words, the size of your real-world play area dictates which virtual worlds you’re able to access.

To use a VR headset, you need space to operate. That space is your play area. How big a play area you need depends on the headset type, tracking system, and content. In addition to a play area, you also need room for any external components—a cable-connected PC, for example.

Based on what we’ve discussed so far, you can probably figure out which type of headset generally requires the most amount of room. If you guessed tethered, you are correct.

Not only do tethered systems have specific space requirements for optimal performance, they also require room to store your connected PC and peripherals (base stations, external speakers, etc.)

How much do you want to spend?

As recently as a few years ago, experiencing the best VR on the market meant forking over a sizable amount of cash. Top-tier VR content required a powerful PC, a tethered headset, and a substantial investment.

Luckily, times have changed, and today’s VR isn’t quite as financially prohibitive. It’s still true that the most powerful VR systems cost the largest amount of money, but now you can get decent approximations of those top-tier systems for considerably less coin. This is good news for anyone who’s curious about VR, but doesn’t want to max out their credit card trying to decide if VR is right for them.

However, the different price tiers for each type of headset follow a pattern that’s similar to what we saw with power and performance. The more powerful a headset, the better its performance. The better the performance, the more it’s going to cost.

Despite the fact that it’s literally strapped to your face, one of the questions prospective VR users forget to ask themselves is whether or not they’re comfortable wearing a headset for prolonged periods of time. It’s an important question, one that has a considerable impact on your overall VR experience.

Unfortunately, when it comes to the different types of VR headsets, there is no correlative truth about comfort. Part of the reason why is because comfort levels are pretty subjective. What one person thinks is too big or heavy, another judges as the perfect size.

That double-padded headband might be extra comfortable to you, but your neighbor thinks it’s cutting off the circulation to their face. You get the idea.

See the difference with VIVE Pro. High resolution AMOLED screens, with super-rich colours and contrast, dazzle the eye and bring your imagination to life.

Optimized from top down for ergonomic comfort. Headset weight is evenly distributed to achieve a balanced centre of gravity. Suits a wide range of head shapes and sizes and is adjustable for different pupillary distances. VIVE Pro is ideal for extended sessions in VR.

The Valve Index sets a new high bar for VR quality, but this is purely for the hobbyists and most intrepid virtual explorers. While Facebook is moving the needle with affordability and accessibility, Valve is pushing VR forward by upping the fidelity. However, we still think it costs far too much.

The Quest is Oculus’ fourth consumer VR headset. Like last year’s Oculus Go, it’s got a standalone design, which means it doesn’t connect to a phone or PC. But where the Oculus Go is meant for stationary TV or movie viewing, the Quest is a gaming device.

It includes dual hand controllers instead of a single remote, and it’s studded with four wide-angle tracking cameras, which let users walk around a fairly large space. It will also support some of the Rift’s most popular experiences, including the rhythm game Beat Saber, rock-climbing title The Climb, and shooter Robo Recall

The Odyssey+ improves on its predecessor with Samsung’s Anti-Screen Door Effect technology. The Screen Door Effect (SDE) is a widely known issue for VR headsets, but Samsung solves it by applying a grid that diffuses light coming from each pixel and replicating the picture to areas around the pixel.

This makes the spaces between pixels less visible. This provides a perceived 1233 ppi, which is doubled that of its predecessor’s 616 ppi.

There are also built-in headphones that were tuned by AKG and provide 360° spatial audio. The rich, dynamic surround sound delivers audio naturally. There is also a built-in microphone array for when you want to chat with friends and teammates as well as take full advantage of Cortana, the digital assistant for Windows. 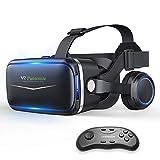 The Pansonite VR Headset is a mobile VR headset, meaning it provides lenses and a structure to put on your head but requires you to use your smartphone for the screen and computing. It is compatible with both iOS and Android smartphones.

Unlike other mobile headsets, this model of the Pansonite VR Headset does not have headphones. It does, however, have a hole in the phone case which allows you to plug in your headphones or earbuds.

The Oculus Rift headset is simple and understated. It’s a plain black rectangular visor with rounded edges and little visual flair. The front panel is completely flat, marked only with an Oculus logo. The sides of the visor are similarly flat, and connect to arms that pivot slightly up and down and attach to the three-strap harness for securing the device on your head.

Oculus Go marks a new era for VR, one in which anyone can simply slip on a headset and dive into virtual realms. Though not perfect, it offers a comfortable fit, solid build, excellent visuals and the promise of more great content to come. For the price, Oculus Go gives it’s tethered older brother Oculus Rift a run for its money.

PlayStation VR is an affordable introduction to quality VR. Many of the experiences aren’t as crisp as the ones found on the Oculus Rift or HTC Vive, but, for a system that uses a PS4 instead of an expensive PC gaming rig, we’re not complaining. Plus, a recent price reduction makes it even more appealing.

We have come to the end of this review, these items are tested, and they have been found to be reliable, if you want to have a great gaming experience, you should get one of these. You are sure to get back the value of your money.