We know how difficult it can be to get a gaming monitor, that will actually give you the value of your money, so we have compiled a list of the best gaming monitors out there.

No matter if you are a serious gamer or you play for a few hours on the weekends, you should know that your gaming monitor can be the reason for a humiliating defeat or glorious victory. Read through, as we show you the best gaming monitors.

The size of the gaming monitor depends on your budget, the available space on your desk. Also, keep in mind that the higher the resolution and the refresh rate is, the more powerful the internal hardware should be.

If you are going to squeeze your budget to get a new monitor, you’d better narrow down your search to 24-inch devices, although the 27-inch monitors are considered a sweet spot for gaming and performing everyday tasks.

What is Adaptive Sync?

The adaptive sync is a technology managed by NVIDIA and AMD. The two companies manufacture G-Sync and Free-Sync modules, respectively. For people who are not planning to use the monitor for gaming the availability of an adaptive sync is probably the least of their worries.

However, in gaming, the adaptive sync does matter as it reduces the image tearing and motion artifacts.

NVIDIA’s G-Sync is an inbuilt hardware chip, while AMD’s Free-Sync is an open source.

The G-Sync and Free-Sync are similar in terms of performance. They both aid the reduction of the screen tearing and other motion artifacts by lowering the input lag, but NVIDIA’s product is more expensive. The reason is that manufacturers need to buy a NVIDIA license to be able to integrate the G-Sync module into the monitors.

All specs, mentioned above, add to the price of the monitor. If you have a very limited budget, you can get a 24” device with TN panel and relatively fast pixel response for less than $200. Essentially, the amount of money you have to spend on a monitor is determined by the features you want it to have and those you think you can make a compromise on.

The size of the gaming monitor depends on your budget, the available space on your desk. Also, keep in mind that the higher the resolution and the refresh rate is, the more powerful the internal hardware should be.

If you are going to squeeze your budget to get a new monitor, you’d better narrow down your search to 24-inch devices, although the 27-inch monitors are considered a sweet spot for gaming and performing everyday tasks.

There is not a massive difference between the LED and LCD monitors, although LEDs have some more advantages as compared to their LCD counterparts. The LEDs ensure sharper images, they require less power and their screens tend to be thinner. Despite being more expensive than the LCDs, the LEDs are becoming the standard not only for gaming, but also for everyday tasks.

What is Input Lag

The input lag, also known as display lag, refers to the time it takes for a mouse movement to appear on the screen. The input lag is measured in milliseconds (ms).

If you are a casual gamer, a monitor with an input lag of less than 30ms will suffice. However, if you compete on a professional level, the input lag should be 15ms or less. Keep in mind that the input lag is not a standardized metric and some manufacturers do not outline it in the product specs.

What is Contrast Ratio?

The Asus ROG Swift PG27UQ is one of the best gaming monitors because it’s heralding a new age of panels. It combines the high refresh rates of Nvidia’s G-Sync tech with 4K resolution and HDR (high dynamic range) support for exceptional image quality. 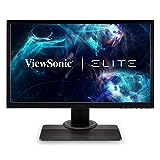 The ViewSonic® ELITE XG240R is a 24” Full HD monitor packed with all the speed and features esports and gaming enthusiasts need. Equipped with ViewSonic exclusive RGB lighting technology, ELITE RGB, the XG240R beautifully illuminates gaming setups and synchronizes to other RGB peripherals without any additional software. 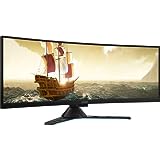 Excellent. The back is plastic (no glossy parts) while the stand is some sort of solid aluminum is presume. Adjusting the height feels smooth and offers enough versatility (130mm between the lowest and highest point).

The back of the monitor features a beautiful honeycomb layout/pattern which looks amazing.

I’m not a fan of the blue patterns on the foot, but as they are very subtle I can live with them (I’m sort of a minimalist).

The OSD buttons are easily reached and have great feedback when pushed. They are on the front, but in a subtle way. I prefer this over having buttons on the back of the monitor, constantly failing trying to press the right button). 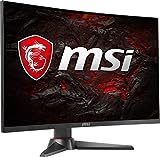 MSI have recently announced their new eSports monitor, the Optix MAG251RX. This model is 24.5″ in size and features a 240Hz refresh rate IPS panel. It offers a 1920 x 1080 resolution along with a 1ms G2G response time spec and adaptive-sync support for VRR from both NVIDIA and AMD systems. NVIDIA G-sync Compatible is mentioned as well suggesting that the screen will be certified by NVIDIA.

Sometimes we get a chance to mess around with the most absolutely wild products on the market, and we think the Samsung CRG9 qualifies. This is a bonkers 49-inch monitor with a 5,120 x 1,440 resolution and HDR 1000. It’s also incredibly expensive, but with these kind of specs, it kind of has to be.

The Samsung CRG9 is a glorious gaming monitor, but it’s so expensive and so hard to drive, that it’s only really suitable for people with money to burn. 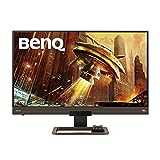 The BenQ EX2780Q is a 27-inch gaming monitor that starts with the fundamentals, like a 1440p IPS panel refreshing at 144Hz and offering a 5ms GTG response time, but it expands on that in a number of ways. The first way it goes above and beyond your typical gaming monitor is with its 2.1-channel speaker design.

Its combination of a color-accurate, fast-refresh IPS panel and a strong speaker offer a strong entertainment experience, but some obnoxious HDR behavior is disappointing at this price point. 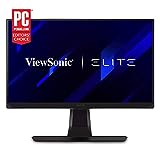 ViewSonic’s Elite XG270QG gaming monitor delivers everything that 1440p gamers could want, and a bunch more. It’s a premium panel that, despite the price, still packs tremendous value for serious high-speed play. 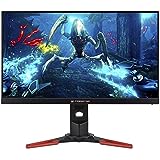 The Acer Predator XB271HU delivers a flawless gameplay experience thanks to G-SYNC, ULMB, fast response time, high refresh rate, and low input lag. The image quality is stunning as well though calibration is required. Versatile design and extra gaming features are a nice addition as well.

The Acer Predator XB271HU bmiprz is a premium gaming monitor which combines a 144Hz refresh rate (overclockable to 165Hz) and a 1440p IPS panel with NVIDIA G-SYNC technology for a flawless gaming experience. 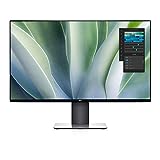 The Dell UP3218K UltraSharp 8K monitor is an incredibly impressive monitor, and while it definitely won’t be for everyone, in some ways it feels like it’s giving us a sneak peek at the future.

We have come to the end of this review, as gamers, or potential gamers, using of of these will keep you glued to the game, cause of the quality they deliver, in terms of graphics, and performance. going for any of these monitors will make you pleased, as they will definitly give you the value of your money.