The most important thing for any Body-worn cameras (BWC) is that it captures what it’s intended to capture. Ideally, the BWC should follow the officer’s line of sight.

If the camera’s affixed to the middle of the person’s chest and they get into a fighting stance, the camera will be pointed towards the ground. While some recommend camera’s on the ear-paddles of sunglasses or the brim of baseball caps, keep in mind those items are not affixed firmly to an individual and could be easily removed during the conflict.

Our recommendation is to look for a camera that is affixed to the epaulette (shoulder pad) of a cloth.

Aside from the placement and POV of the camera, other things to take into consideration are the actual features of the camera, such as the following:

When an individual hits record, the event they’re recording has presumably already started. With pre-event recording, the camera will attach the previous 20-30 seconds before the record button was hit to the footage.

While video footage is good, context is even better. A BWC with a microphone is more powerful than just the footage itself. However, some cameras will not have the microphone on for the pre-event recording.

The resolution of the camera is important in recording details and proper lighting plays a factor in this. Look at cameras that have a good resolution in low-light situations.

A BWC needs to be durable to handle whatever comes your way. It’s important to focus on the “ruggedness” of the camera while also keeping in mind size and weight. If the camera is too heavy or big for the individual, it might not be used.

Look for cameras that are sturdy, lightweight, and weatherproof. Also, take into consideration the battery life and battery lifespan of the camera.

The battery should last an entire shift before needing to be charged, which is especially important BWC’s that have pre-event recording.

The battery-lifespan is also important- how long can you go without having to replace the battery? Looking into the effectiveness of the battery after so many charges is important because it could lead to large expenses down the road.

The amount of internal storage space on the camera is important as it will determine how often the footage needs to be downloaded. Most cameras have between 16-64GB of storage on them, with about 1GB being used per hour.

Of course, this also depends on the resolution of the camera. The higher the resolution, the larger the file size the footage will be.

The bigger question is how are you going to manage the thousands and thousands of hours of footage and store it all? Look for solutions that offer intuitive software for managing your data and are partnered or offer CJIS compliant cloud storage.

It’s important to note that while many agencies like to store all their data on their own network, it may make better fiscal sense to opt for cloud storage given its relatively low cost and high security.

Your budget is ultimately going to be the make or break decision. However, there are more expenses to take into account than just the upfront costs of purchasing the cameras. 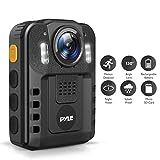 Capable of recording 16MP stills, 1080p video, and 2-way audio streaming, the Vigilante Pro Compact Action Body Camera from Pyle Audio is comprised of two cameras for a full-view recording of in-the-field action. Featuring two clip-on cameras, one of which is detachable, the Vigilante Pro can capture footage of what’s in front of you, and in back. Both cameras feature an HD lens with IR LEDs for capturing footage in a variety of light settings.

When is a body camera not a body cam? When it’s a ‘micro camcorder’ of course. Mere semantics, obviously, as this item can be worn ‘hands free’ thanks to a handy back clip and is one of the smallest options on the market. If it’s simplicity of operation you’re after, this one offers the core essentials of 1920×1080 pixels video capture at 30fps, removable 8GB microSD card for storing up to four hours of HD quality footage, plus easy plug ‘n’ play operation via USB. 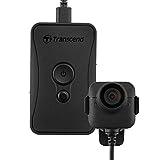 Record hands-free video with the DrivePro Body 10 1080p Body Camera with Night Vision from Transcend. This body camera uses a Sony sensor to capture 1920 x 1080 resolution video at 30 fps. Four no-glow IR LEDs automatically turn on in low-light conditions to provide night vision functionality in complete darkness. The camera has a 130° diagonal field of view so you can capture everything in front of you. The quick snapshot button takes still images while the camera simultaneously records video. Audio can be captured during video recording thanks to a built-in microphone.

The camera’s built-in battery delivers up to five hours of battery life on a full charge. A 32GB microSD card is included to store recorded videos. This device is IPX4-rated for protection from splashing water. It is also shock resistant. 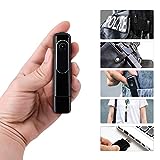 Discretion is the name of the game when it comes to this personal security device or, cough, spy cam. It’s a small and lightweight body camera option that also comes supplied with a clip, or, alternatively, can be worn about the neck, pendant-style. Chief among its enticing features is Full HD video up to 30fps, for which you’ll want to make use of the 32GB card supplied out of the box. Alternatively, a 64GB microSD card is offered 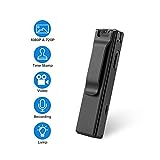 The device can be timely, record the scene, collect evidence, standardize the law enforcement behavior, reproduce the scene picture to ensure the accuracy and impartiality of law enforcement. Perfect for police officers, security guards and other professionals 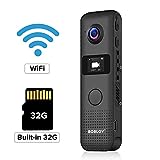 With a brand name straight out of Soviet era Russia, this no-nonsense body camera pares operation back to just three simple buttons, offering a generous 21-megapixel photo resolution, a 10 megapixel infrared night vision mode that activates automatically in the dark, and lens with a 140° angle of view. Attachment to clothing is via the choice of two rotatable clips – one large, one small – while video (1296P, 1080P or 720P) from the device can be streamed to your smartphone (there is no screen on the body camera itself). 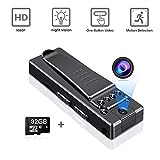 Body camera in this mini size is rare, you can wear this portable hidden body camera on your shirt pocket, or hang it around your neck with the lanyard(lanyard is included in the box), the body spy cam is very unobtrusive, but sturdy built if you feel the wearable camera at hand || This Cop spy cam is easy shooting with clicking the top button to record or purse, with USB plug, you can plug this police body cameras into your computer and easily upload the videos. 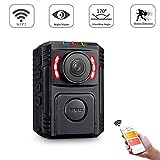 The SC-DV7 Ultra 1296p Body Camera with Night Vision from PatrolEyes can capture up to 2304 x 1296 video at up to 30 fps for smooth and clear playback. The swivel clips allow you to attach the camera to your clothes, backpack, or bag for continuous hands-free recording.

IR LEDs allow the camera to capture images in dark environments with its wide, 170° field of view. It can take still images at resolutions up to 32MP for high-quality photos.

A 2″ LCD screen provides quick access to video and photo playback, and lets you adjust settings on the go. Additional features include a built-in microphone and speaker to record and playback audio, as well as a laser pointer.

The body camera comes with 64GB of internal storage to record video and photos. The 2650mAh battery provides up to 12 hours of standby power and up to 8 hours of continuous use. A drop-in charger, wall charger, and car charger are included to charge the body camera while at home or on the go. 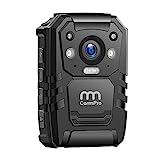 We have come to the end of this review. If you read through the review, you must have seen a body worn camera that really suits your needs. You shouldn’t hesitate in getting one. You will be pleased if you purchase any of these body worn.