Best Burner Phone In of January 2021

There are some places you’d go to, but you don’t want to take your Smartphone along with you, you might want something smaller and simple, just for calls and messages. Despite all the buzz surrounding the new iPhone, many are considering something on the other end of the spectrum: a cheap, disposable, and prepaid mobile phone. Having a burner phone can come in handy.

OK, so these “burner phones,” as they’re often referred to, may be an addendum to your pricey smartphone rather than a replacement for it,

You don’t have to be a thief, or a drug dealer to own one. Burner phones give you that simplicity, and wades off people’s stalking eyes from you, because of the flashy Smartphone you own.

Burner phones come at a very low cost, so they are easily disposed off, without tears, in the case of an emergency.  There are bound to be times when you’d want to leave such an expensive item at home and switch to something more disposable.

You might want to go to a carnival, camping, exercise, or hiking on difficult terrain, and you might want to consider a second, cheap phone. That way your favorite smartphone phone can stay safe and home and you can also take advantage of a more basic handset that can last for days without the need of recharging.

Most of our top “burner” phones below last up to a week or more before needing a charge. Their plastic build is more forgiving to drops and bashes. And some of them cost less than a cheap bottle of wine at a bar.

But these devices have some desirable benefits.

While you might think a “burner phone” is something only a criminal may use to avoid being tracked by authorities – such as the drug dealers on a show like The Wire – law-abiding citizens may also appreciate the privacy awarded by a burner phone.

For example, you might not want to use your main phone number if you’re posting items on Craigslist or another classifieds site. After all, you’re opening up the possibility of unwanted calls or texts from strangers on your personal line. Instead, when the transactions are completed, you can simply dump (or “burn”) the temporary phone.

Back-up phone: While some burner phones have some advanced features, most are barebones devices used for calls or texts only. Because most these devices don’t have big screens and advanced radios like 4G/LTE and GPS, they likely boast much longer battery life than a premium smartphone. This could be ideal for travelers, perhaps, or at least as a back-up phone if your main device’s battery peters out.

Low cost: Price is a good motivator, too. Rather than spend upwards of $850 for the latest iOS or premium Android device, pre-paid burner phones could be as low as $20 for the Motorola EX431G Tracfone, which includes a full physical keyboard and free double minutes for life.

If you prefer a compact flip phone, the Samsung Entro is roughly $20 while the Kyocera Coast Prepaid Phone is $35. Pro tip: While your burner phone doesn’t have access to data, many social networks like Twitter and Facebook have a SMS option, so you can still be notified to get updates via text message.

WHAT IS A BURNER PHONE?

A burner is an inexpensive mobile phone that is designed for temporary use, after which it may be discarded. Burners are purchased with prepaid minutes and without a contract.

In actuality, although prepaid phones are often called burners, it’s more likely that the handsets will be kept and the minutes topped up when they run out. Only people with extreme needs for privacy are likely to use actual burners.

Many people became familiar with the concept of burner phones from watching The Wire, a popular television series in which drug dealers used burners to communicate and then got rid of them to prevent tracking by the police.

Paying for the phones with cash rather than a credit card and having no contract with a service provider meant that there was no record connecting the user to the phone number to begin with. If the user suspected that the number was compromised they could just dump the phone and purchase a new one, which would have a new number.

Burner phones protect your identity from even the most powerful government groups; even the NSA doesn’t have the ability to track you.

Physical burner phones are the exact opposite of any existing smartphone that most people have today. In fact, they look very similar to those old school flip phones that people used to use when they had long, irrational arguments with their boyfriend or girlfriend, specifically so they could slam the phone shut as hard as they possibly could. Burner phones give you the same phone slamming ability as a regular flip phone, although it is not recommended that you do so.

The simplest of these phones won’t let you check email, look at websites or use social media platforms like Facebook and Twitter. Some of them don’t even have cameras. And those that do won’t take remotely good photos.

They also tend to use microSIMs rather than the nanoSIMs, now used by almost every single current smartphone. MicroSIMs are larger. You’ll either need to get a new SIM from your phone network or a converter, a little piece of plastic into which your normal SIM slots.

These phones keep can help your identity anonymous and your privacy intact for a very affordable price. For the stand-alone option, prepaid phones eliminate the hassle of dealing with an extra phone bill while keeping your privacy completely secure.

Bellow are things to consider before getting a burner phone. 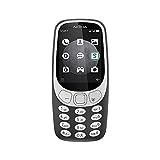 Above all, the 3310 is a phenomenal exercise in marketing and weaponised nostalgia. While you could call that cynicism, few would care about the new 3310 if it wasn’t called the 3310. The 3310 3G is exactly what it promises to be: an ever-so-slightly more modern version of the iconic 3310. Nothing more, nothing less.

The original 3310 is of course one of the best-selling phones of all time, and iconic thanks to its supposed indestructability. Nostalgia’s been big in 2017 – presumably because everyone would rather relive the past than deal with this trashfire of a year – so it’s no surprise there’s been a buzz about the new 3310.

While the 3310 3G may predominantly be a brand play for Nokia, it’s nonetheless a capable feature phone. Feature phones are pretty terrible though, and the reality of a digital detox doesn’t meet nostalgia clad expectations.

Battery life is easily the 3310 3G’s standout feature. The box promises just under a month of standby time, and about six hours of talk. In reality, we found you could comfortably go about a week between recharges, although this will vary depending on exactly how much time you spend making phone calls.

A battery that’s measured in days rather than hours is nonetheless impressive in 2017, but admittedly, much of the 3310 3G’s longevity can be chalked up to its minimalist approach to functionality.

A glance up at the picture above and with the word “Lumia” missing from this device’s name you may think we’ve travelled back in time, but oh no the Nokia 105 is very much part of the here and now.

While smartphones having been ruling in the roost in places such as Europe and the States, feature phones still play massive part in the mobile phone ecosystem in developing countries where demand for low cost, basic handsets is high.

The 105 takes over from the Nokia 1280 as the entry point into Nokia’s mobile world, and it’s got some pretty big boots to fill as the 1280 managed to shift 100 million units in three years. 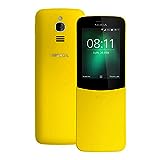 The original Nokia 8110’s cameo appearance in The Matrix (1999) remains the coolest bit of product placement ever. Neo rips open a mysterious FedEx package to find a curved black handset, which immediately begins to ring. He holds it in his palm and, with the slightest touch, activates a sliding mechanism to reveal the concealed keyboard. He puts the phone to his ear; it’s Morpheus.

Now, two decades on, the 8110 is back. Sadly, the spring-loaded slider, which was an exclusive modification for The Matrix, has not made it into the re-release: according to Nokia, it would have made the device too bulky and heavy. What the re-released 8110 does have, however, is 4G network connectivity, dual SIM slots, and smartphone apps such as Google Assistant and Facebook – so now you really can access the Matrix from your Nokia mobile.

Burner phones are cheap, and could be gotten at anytime, so why not get yourself a burner phone as a backup for your smartphone. you never know when it might come in handy.

Best Electric Guitar Of of January 2021